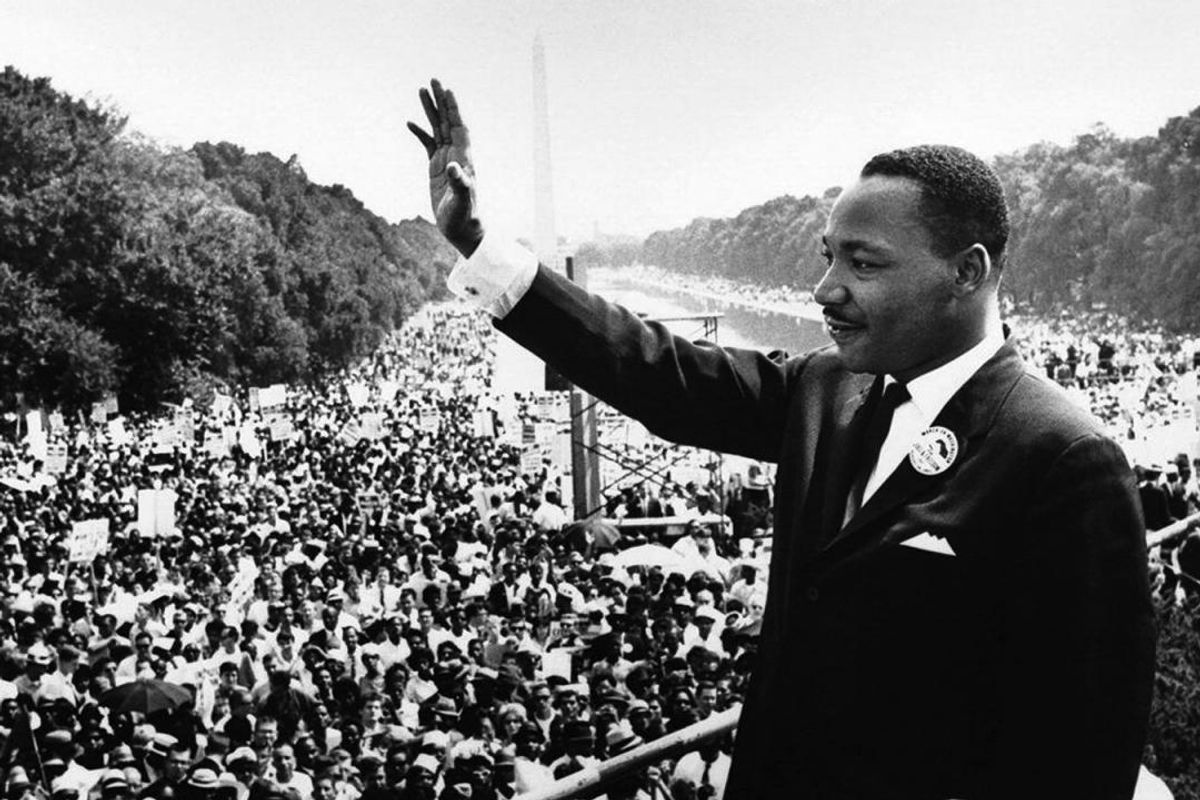 There are tough times coming. I hope nobody's thrown in jail, but I could see a time. But we have to be people who are nonviolent. We have to be those people because that's who we are. But they are painting us into something that we're not. So we need to go the extra step, and I don't think the extra step is to convince anybody because the media is going to do whatever they want.

This is for us.

As I read what Martin Luther King had people take, the pledge of nonviolence and the five principles of nonviolence, what he was doing was not sending a statement to the press that we're not violent. That wasn't the only goal there. The bigger goal, I believe, was to ingrain these thoughts and these principles into people because when it gets hard, you have to have a rock-solid foundation, something that you really, truly understand in your gut. Something that you know. It's like Ben Sherwood says, you know, those who survive are the ones who have looked out at the plane and said if this thing did catch on fire, how the heck would I get out of here?

You've made a plan. You've already war-gamed it in your head. That's what I think the pledge of nonviolence and the five principles of nonviolence was. So I've put them up temporarily now on my website, but I want you to read them and I want you to ponder them. And I'm going to ask you to do what Martin Luther King did with his people and that was sign your name to it. Sign your name to it.

Here they are. The Pledge of Nonviolence. As you prepare to march, meditate on the life and teachings of Jesus. If it's Buddha, it's Buddha. If it's Moses, it's Moses. But meditate. Understand the peace that these people brought. Understand Jesus, he's my guy. Your guy might be different.

Number five, sacrifice personal wishes that all may be free. So in other words, I want to be left alone. I want to go back and just have fun again. I want to do fun shows and funny shows and I want to live my life. I want to raise my kids. I want a nice car. I want a nice vacation. It's not about that now. It can't be. We have to change. We have to be willing to sacrifice personally. It means that you may lose your house. It may mean that whatever it is that you don't first entrap yourself into the slavery of this government. You don't take the handouts. Don't enslave yourself.

See, Martin Luther King, his whole point was "I trust the American people. If they see racism, they will reject it." I still believe that and so do those in power. That's why they play that racism card. But you have to show it to them. You have to be that person. If you are always quiet and silent, if you are the crowd that we've had each time at the American Revival, 8,000 people somebody is hurt, we break out spontaneously into Amazing Grace? There's no way to paint that any other way. If they cover it, it would be covered as an amazing thing and people would say, wow, I want to be a part of that.

The protestors outside are the ugly ones and those are the ones that America says, I don't want anything to do with those people. It's ugly and dark. It's evil that is going on. Americans are not like that. Why do you think they keep saying this is akin to the civil rights movement?

Why do you think Nancy Pelosi went into that crowd? That was Selma! That was the march to Birmingham. They just didn't want to walk 57 miles. They go into what they think are a bunch of hating racists. They stir the pot, they anger them, they get them going and then all of the old leaders of the civil rights movement that were in that march, they lock arm in arm just the way Martin Luther King did and they recreate that march through the sea of haters, racists. When you didn't respond that way, they didn't know what to do. They just had to make it up, look at the racists. You are not. The louder they get, the quieter you must become.

Number seven, perform regular service for others in the world. Number eight, refrain from violence of fist, tongue and heart. Number nine, strive and be good spiritual and bodily health. My wife loves that one. Number ten, follow the directions of the movement leaders and the captains on the demonstrations. That one doesn't make any sense because there are no leaders at this point.

Listen. I want you to go to the website at GlennBeck.com. You'll also find the five principles of nonviolence. Please print them out, live these things, become those people. We already are those people. Cement yourself in those things, those teachings, those ideas and sign the pledge.